Hey spacerangers break the boundaries!
Spacerangers break the boundaries is a jargon for IBM business competition 2019 held by Universitas Kristen Petra on 7-10 February 2019. For this event JAC School sent 1 group with the groups name BRIENDS, they are Matthew Bevan Suwardji, John Axelle Jethro, and Vincent Lukito from grade 10.
For the first day, all participants following cognitive games. In this game they should prepare cognitive skills and mental. They had to do life simulation. They got an education, found the job, and managed their income for their life. Besides that, there is “ market variable” that will effect every activity and their decisions. At the end of the first day, there was a seminar with the topic discussion industries revolution 4.0
The second day, competition left 24 groups, including BRIENDS, all day long they went around Surabaya for finishing rally games and prodigy games. Prodigy games is a game where all members in one team will play in different room and different kind of mini game. In a room they have to cooperate with members from the other group. The goal of this game is to develop the ability to think smart and think critically. And great job for Birends, they passed to the next round
The third day, the game named “The Octagon”. This game was adapted from the entrepreneur’s life, especially when they build a company. Every team build and manage a branch company to support main company. In this game, all participants had the capability to manage and take decisions to use all resources effectively and efficiently. From the octagon, there were 6 groups left including BRIENDS.
In the other place with the same day, JAC School also sent 2 groups for IBM competition held by Universitas Ciputra. They were Hazel Juanita Handoyo (G10), Naura Iqbar Herasmana (G10), Nicholas Reynard Sadikin (G10), Allena (G11), Alfonsius Sava M.R (G11) and Amanda Bernice (G11). Unfortunately they couldn’t grab the trophy.
Back then to Petra Competition, for the final round, they had to prepare business plan material for the fourth day. Briends bring idea to presenting furniture product as their plan. From their presentation, finally BRIENDS became the 3rd winner and bring home a trophy and 3 million cash. Furthermore they also became the 1st winner of the blog which was sponsored by Bantex Indonesia.
Congratulation Briends for your great experience for four days. (Reported by Ms. Evi) 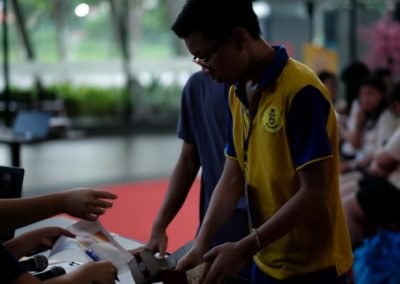