JAC SCHOOL, Surabaya – Vincent Dennis and Helena Viveca managed to set their position into the first and second winner of English Olympiad and Storytelling competitions which held by UNESA (15-16 November 2019). The annual competition that took place in UPT Pusat Bahasa UNESA, Ketintang Surabaya was participated by Senior High School throughout East Java. Range from Surabaya Senior High school to Banyuwangi. “I can see it is pretty tough competition since each school send at least 10 participants, meanwhile JAC only send 2 candidates for English Olympiad, Tita and Vincent, but I believe they will do their best,” Ms. Herlina (the coach of English Olympiad) explained.
Our G10 students, Nathania Nabilah Pratitasari and Vincent Dennis Judyanto, are JAC representative for English Olympiad. “it was so fun. It was just like a test,” Vincent Dennis (G10). English Olympiad which held on Friday (15/11) took more or less 2 hours from 8 am to almost 10.30 am. At 5 pm on the same day, the winner for English Olympiad finally announced and published on Pusat Bahasa Unesa official Instagram account. Vincent Dennis, our G10 student, managed to set his position on the first with 613 for his score (the highest of all).
On the other hand, English Storytelling and Membaca Puisi (Bahasa Indonesia) competitions were a bit different in regulation. Those two competitions involving Social Media in preliminaries stage. The candidates must record their performance and send to Youtube. The most “like’ video will be the finalist and move on to the next stage. Helena Viveca Handoyo has successfully grab the judges’ attention. “I was so glad eventhough I was so nervous at first. I never think I will be the second winner because as far as I know, most of the participants are very talented,” Helena stated. (by Ms. Herlina) 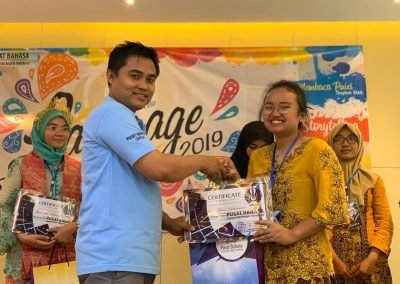