Lebaran Day Celebration was held in JAC School Surabaya on July, 18th 2019. This event was followed by all primary students from Primary 1 – Primary 6. The celebration was opened by class teacher’s story about the meaning of apologizing to each other in the class and it was continued by watching videos in Primary 1 until primary 3, and doing experiment with bleaching and food colouring in Primary 4 until primary 6. After having snack, the students shared the traditional cakes which they had brought to all friends and staff in JAC School include the securities and house keepers. After they shared the traditional cakes, Primary 1-3 students doing competition making chocolate balls with their own class teachers in the class and primary 4-6 making and decorating puding with the class teachers too. This represent a teamwork between the students and class teachers. They were so excited as this was the first competition they joined in new school year. The results for the winner making chocolate balls were P1A, P1D and P3A and followed by P4A, P6C and P6A for the winner making and decorating puding. 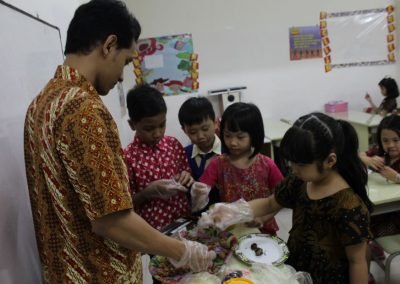