On Saturday, November 11th 2017, Ciputra University held Food Technology rally games for senior high school. For that competition, JAC sent two groups. First group (watermelon group) which represent G11 were Jennifer Vinicia Sebastian, Clement Sungkono, and Reven Limadinata. Second group (Inulin group) which represent G12 were Allison, Bryan Hadiyanto, and Stefanus Sungkono.
In this competition, each group had to enter some rooms to solve the problems given. If they could solve the problems, the committee would give money or token to them. So, each group had to collect money and token as much as possible to win the rally game. Our group, INULIN become the FIRST WINNER of the rally game because of their great effort and teamwork.
During rally game, each group had to follow ig selfie contest. Inulin was the top five which gained many likers in Instagram, so they got the voucher from the committee. Watermelon group which uploaded boomerang in Instagram also got many likers. It made watermelon be chosen as the favorite winner for Instagram selfie contest.
All students felt so interested with the game, they had a great strategy to win the competition. They played fairly with good integrity. Great job, students! (Arysta Ningtyas) 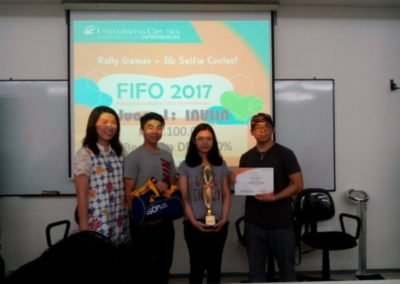